NEW LONDON, Conn. (Tribune News Service) — Travis Morris entered the Coast Guard Academy in the summer of 2018 as an operations research and computer analysis major, but the academy introduced the cyber systems major during that summer, and he fell in love with it.

When the academy’s commencement ceremony takes place Wednesday and he is commissioned, he will be among the very first 22 people graduating from the academy with this major, the first new major created since the 1980s.

“It’s an honor, in a way,” said Morris, who is from Tampa, Fla. “You’re paving the way for future kids coming into this major, having an interest in cyber, and impacting the cyber realm in the world.”

Last summer, he had a cyber internship at the C5I Service Center — C5I stands for command, control, communication, computer, cyber and intelligence — in Virginia, where he spent six weeks learning about the basic operations of military computer systems.

After graduating, he will be a deck watch officer for two years on the Coast Guard cutter Vigorous. He doesn’t expect this to have anything to do with cyber but wanted the experience of being afloat for his first tour. After that, he hopes to go to graduate school for cyber or work in the cyber domain at Coast Guard Headquarters.

Morris said the major is very diverse, incorporating electrical engineering and operations research and computer analysis, or ORCA, courses. Similarly, instructor Lt. Ryan Quarry — who has taught fundamentals of information security, introduction to computing and introduction to cyber technology — said what makes the major unique is that it’s very cross-discipline.

Quarry said the major has integrated elements like ethics and cyber policy. He said the academy continually has asked cadets to brief senior leaders, and that the cyber systems majors have done a great job of engaging with people “who really want to know what their existence is about, because it’s just so brand new.”

The goals of the major are to prepare cadets to defend Coast Guard and governmental cyber systems, protect critical infrastructure from cyberattacks and manage information technology for the Coast Guard. A new cyber lab opened at the academy in 2018.

Some of the other classes the cyber systems majors have taken include computer network security, cryptography, digital circuits and software engineering. 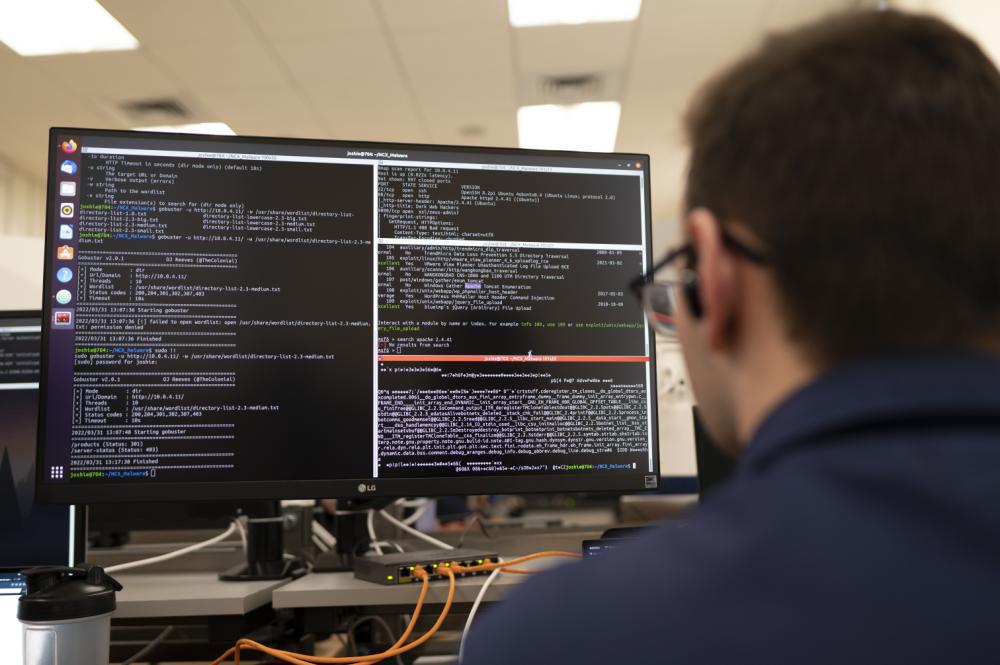 Both Morris and fellow cyber systems major Austin Aitken, who is from New Jersey, raved about the foundations of information security course they took with Gary Kessler, a visiting professor from Embry-Riddle Aeronautical University.

In another class, Aitken coded a robot with Arduino. His capstone project, which was sponsored by the National Geospatial-Intelligence Agency, was using artificial intelligence to recognize military insignias.

“It was definitely a struggle sometimes being the first for the major, because obviously (we) were taking brand-new classes that had never been done before, so we were kind of like pioneers,” said Spencer Kotys, who is from Minnesota. “I think we really set it up for the classes to come, and I think that the major will be really good in the future.”

Kotys did an internship last summer in Alaska with the National Security Agency, and he has considered working at the NSA or Cybersecurity and Infrastructure Security Agency in the future. For his senior capstone this year, he programmed an application on Oculus virtual-reality headsets to help teach other cadets navigation rules.

Kotys and Carolyn Ziegler were among the cadets who traveled to computer security conferences such as Black Hat and DEF CON, and Ziegler also attended the Women in Cybersecurity conference this year. Ziegler, who is from Virginia, said the experiences opened her mind to all the different avenues in cybersecurity, both government and industry.

“It truly impacts every single thing we do, in our service as well as outside,” she said.

“Protecting our maritime port security is at an all-time high, understanding how we can secure our assets,” Ziegler said, whether that’s vessels or radar and navigation systems.

For her billet, or post-graduation assignment, she was selected for the new cyber career pathway officer billet, and will be working with cyber professionals at Coast Guard Sector New York.