A weird thing happened to AMC Entertainment in January. The movie theater giant was reeling from the pandemic, facing a potential bankruptcy, and its stock was trading at $2 per share.

And then it became a meme.

Online traders gathering on platforms like Reddit and TikTok embraced the company’s stock and propelled its share price upward (it opened Wednesday at $30 per share). What happened next may have saved the company: $600 million in debt was wiped out by Silver Lake, majority owner Wanda Group sold all its stock, and most importantly, AMC itself sold over $1 billion worth of stock, giving it a financial lifeline and leaving some 4 million retail traders (or, “apes,” as some of those traders call themselves) owning more than 80 percent of the company.

Despite the unusual warning to investors when it announced the stock sale (“Under the circumstances, we caution you against investing in our Class A common stock, unless you are prepared to incur the risk of losing all or a substantial portion of your investment” [bolding theirs]) AMC’s online fans poured their cash into the offering.

Memestock mania was the wildest business story of 2021, and while AMC was not the only company to benefit (see GameStop, or Hertz), it is the only one to embrace it so fully, with CEO Adam Aron now sending tweets imploring “haters” to “#ChokeOnThat” after a film has a big opening, posting online polls about which dog-themed cryptocurrency the company should accept next, and hosting screenings flanked by guests in gorilla costumes. 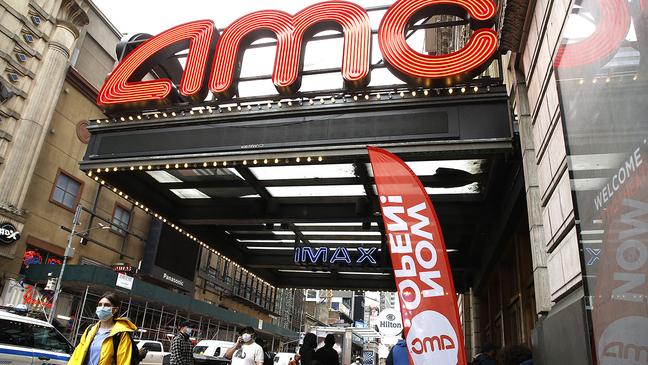 AMC’s memestock status undeniably handed it a lifeline, giving it cash it can use to try and ride out what remains of the pandemic. It also served as an opportunity for AMC insiders, with directors and executives selling about $85 million worth of stock since its rise in January, according to a review of the company’s regulatory filings by The Hollywood Reporter. Aron himself has sold more than $30 million so far, and a paper Form 144 filed with the SEC suggests that he intends to sell about $20 million more in the coming weeks and months.

But if 2021 was the year the memestock was born, 2022 may be the year its durability is tested.

While Spider-Man: No Way Home drew astonishing box office numbers its opening weekend, the pandemic (and the omicron variant) is once again testing movie theaters. AMC’s cash haul, and how it uses it, will be a critical story to follow. AMC may be the test case for whether being a memestock can make a real difference for a company in the real world. Aron has said the exhibitor will opportunistically buy new theaters or take over attractive leases in big markets, and he hinted in the company’s last earnings call that he has grander ideas in store as well: “These monies should allow us to think hard and boldly about how we might transform AMC into a new and different company that does a lot more than just show movies in cinemas,” he said. Step one, however, is AMC’s plan to launch a popcorn business.

Meanwhile, a few other media-related companies appear to be setting themselves up for memestock status in 2022.

The SPAC Digital World Acquisition Corp. is already trading at memestock multiples after it announced its merger target plan with Trump Media & Technology Group. If the stock keeps trading at the elevated rate it is right now (over $70 per share, well above the $10 IPO price) it could give Donald Trump and CEO Devin Nunes billions of dollars in cash to build out his proposed social network and video streaming service … or to extract for themselves.

And the media and entertainment SPAC market has seen a small resurgence late this year, suggesting that 2022 could bring some interesting deals to market. Last week, SPAC and entertainment veterans Harry Sloan (the former CEO of MGM) and Jeff Sagansky (the former president of CBS entertainment) quietly launched a new $750 million SPAC with A+E Networks CEO Paul Buccieri and former top Univision executive Isaac Lee among its board members. Meanwhile, UTA launched a SPAC focused on gaming and the creator economy, bringing some serious merger contenders to the marketplace.

Triller, which began as a TikTok clone and more recently got into streaming boxing matches (including one with Trump as color commentator) is planning to go public through a merger with the video advertising technology firm SeaChange. Its pitch seems tailor-made for online retail traders, with buzzwords like “Web3” and boxing matches featuring social media stars like Jake Paul seemingly designed to catch their attention and cash.

And then there’s Reddit, the social platform that is largely responsible for memestocks in the first place thanks to subreddits popular with retail traders like r/WallStreetBets. The company has filed confidentially for an IPO, which could happen in the next few months.

If Reddit’s own creation can turn the company into a memestock in 2022, the trend may just come full circle.