Prestige object. We are one of the first editorial offices with the chance to have a close look at the upcoming GX800. Compared to the predecessor, Asus not only increases the performance and the dimensions but also equips the device with a 4K display and G-Sync support. Can the cooling system handle the components? Our preview answers initial questions.

Asus GX700 meets MSI GT80: This would be a good summary for the brand-new GX800 in one sentence. While the external water cooling (Hydro Overclocking System) did not change, the chassis grew from 17 to 18 inches to make room for a dual-GPU solution. To make sure not to fall behind MSI and justify the extreme price, Asus includes the most powerful Notebook GPUs on the market. Nvidia's Pascal generation still needs some time, so our review unit has to get along with two Maxwell chips, more precisely the GTX 980 SLI (buyers of the final product will get the top next-gen GPUs). This means the benchmark results and emissions as well as energy measurements are not representative for the final product.

Another difference is the display. Contrary to the prototype, the final product is not supposed to be equipped with a Full HD, but a UHD panel with G-Sync support (supposedly the first 18-inch model in the world). Because of the very early product stage we are not going to evaluate some sections. Asus is still tweaking the following aspects until the launch:

Note: The manufacturer may use components from different suppliers including display panels, drives or memory sticks with similar specifications.

The design is very similar to the 17-inch sibling GX700. Asus once again uses a combination of metal (lid) and plastic (some rubberized), which can live up to the quality of the main rival from MSI, the GT80S. Because of the bigger screen and twice the GPU performance, however, the chassis is bulkier and heavier compared to the GX700.

The GX800 tips the scale at 5.69 kilograms – almost 50% more compared to the 3.9 kg of the GX700. This means the whole system with the water cooling (4.7 kg) weighs more than 10 kg. Adding both power adapters (1280 grams each), the total weight will be 13 kilograms. The MSI GT80S with identical components, but without water cooling and just one power adapter, "only" weighs 6.3 kilograms including the PSU. 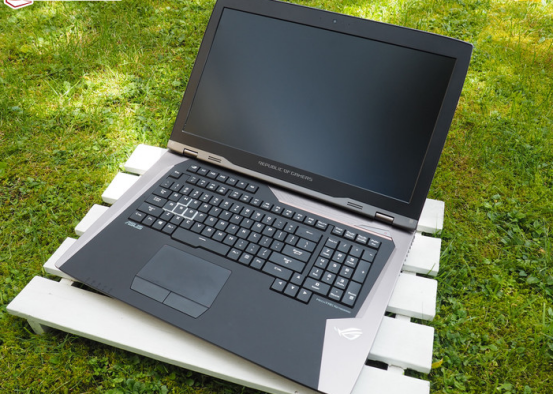 But it does not really matter if you have the GX800 or GT80S: Neither device is really suited for frequent transportation. Both notebooks are primarily designed for users that want a stationary system, but not a big desktop PC. Otherwise, the chassis leaves a very good impression. Besides the design, we also liked the sturdiness. More information about the water cooling is available in the review of the GX700. The latter still has the same strengths (cooling performance) and weaknesses (space requirements), even though there are multiple optimizations according to Asus. Besides the GPU, the CPU is now cooled as well, for instance.

The port variety of the test model is just as comprehensive as the GX700. Among others, Asus deserves respect for the video ports. Thanks to HDMI 2.0, DisplayPort 1.4 and Thunderbolt 3.0, you can attach all kinds of monitors and drive them at 3840x2160 pixels at 60 Hz. Three USB 3.0 ports and two USB 3.1 ports (Type-C) are also very generous. The back is reserved for the water cooling, so Asus was forced to distribute the ports across the sides. The majority of ports are now at least on the left instead of the right side, which is better for the majority of users (keyword external mouse).

The card reader is a very fast model. Almost 228 MB/s sequential read and 159 MB/s when we transfer 250 jpg pictures are above average and comparable to the Schenker XMG U726.

Communications are handled by a Gigabit-Ethernet controller as well as a modern wireless module. Asus promises WLAN 802.11 a/b/g/n/ac (2x2 antennas) and Bluetooth 4.1. Our test model was equipped with Intel's Wireless-AC 8260. There is even a Wi-Fi antenna port at the chassis.

The software has a lot of potential. Not only can you adjust several system settings and monitor the components via Gaming Center, but you can also overclock the processor, graphics card and memory. While the Core i7-6820HK usually manages up to 3.6 GHz, the Turbo Gear setting "Extreme" (activated by default when you boot Windows) will increase the clock up to 4.4 GHz, which is 22% faster than default.

The Gaming Center is rounded off by a manual fan control for the water cooling and the notebook. Our tests were performed with the setting "Auto". Turbo Gear was set to "Standard" while idling and "Extreme" for 3D loads. Similar to the GX700, the video memory will only reach the clocks of a GTX 980M (2500 MHz) without the water cooling.

The maintenance is unfortunately still complicated (see GX700 review). The manufacturer once again waives a maintenance hatch, so you have to remove the whole bottom panel to access the battery, the cooling system, the storage devices and the memory slots.

Similar to the GX700, the GX800 is supposed to be shipped with a suitcase.

Despite our prototype status, the input devices already leave a promising impression. Asus uses the GT80S as a role model and implements a mechanical keyboard. The keys, however, are much flatter, so the keyboard can be placed further at the top (better ergonomics) and there is room for a conventional touchpad. Other highlights are the separated directional keys, the dedicated macro area, and the stylish illumination. Inputs feel firmer and more precise (at the cost of typing noise) compared to a standard keyboard. The touchpad convinces with the smooth finish and the size.

We already mentioned that the final GX800 will be equipped with a UHD-IPS panel, and Nvidia's G-Sync technology will be available as well. The latter prevents line shifts and ensures a smooth presentation. Our prototype only had an FHD display without G-Sync, so we did not perform any measurements.

The Asus GX800 is currently the fastest desktop replacement, even without the next-gen GPUs for the final product. Almost all gaming notebooks are equipped with a high-end quad-core processor, but none of the rivals can compete with the graphics performance. The memory equipment is excellent as well: 64 GB DDR4-RAM should be easily sufficient over the next couple of years. The icing on the cake is the three NVMe-SSDs in a RAID-0 configuration.

Asus uses the Core i7-6820HK from Intel's Skylake generation. This quad-core chip has a TDP of 45 Watts and is manufactured in a 14 nm process. The L3 cache is 8 MB and therefore slightly bigger compared to the popular Core i7-6700HQ (6 MB).

We already mentioned that the clocks depend on the Turbo Gear setting. The maximum will be 3.6 GHz without overclocking, while the chip can reach more than 4 GHz in the Extreme setting. We do not evaluate the clocks via Cinebench yet, because the water block or its contact with the CPU, respectively, is not yet finalized. The same applies for the temperatures later in this article.

There is nothing to improve in respect to the system performance. 8047 points in PCMark 7 is the highest score we ever measured (including desktop PCs). The main reason for the great result is the RAID configuration consisting of multiple M.2-SSDs.

Even though it does not really make a lot of sense to test the graphics cards, which will not be available in the final product, we ran many benchmarks with the GTX 980 SLI. One reason was to add missing titles to our gaming list. The second reason is to have more results for comparisons of the efficiency and performance after the launch of the Pascal architecture.

But back to our prototype: The GeForce GTX 980 is – SLI or not – the most powerful notebook GPU at the time of writing. The top model from Nvidia is based on the already slightly aged Maxwell architecture, which is still manufactured in a 28 instead of 16 nm process. It has 2048 CUDA cores and therefore much more than the less expensive siblings GTX 980M (1536) and GTX 970M (1280), which has a big effect on the performance. There is also no criticism for the video memory (8 GB GDDR5) or memory interface (256-bit).